November AJS Program “US Midterm Elections and US-Japan Relations thereafter” was held on November 26, 2018, at Marunouchi Trust Tower.
The guest speaker Mr. Kazuhiro Suzuki, Director-General of North American Affairs Bureau, MOFA and Mr. Ichiro Fujisaki, president of America-Japan Society, discussed the result and thereafter of the US midterm election which was followed by Q&A session with the audience.
The US midterm elections on November 6 resulted in a divided Congress while the Republican Party added their margin in the Senate, the Democratic Party won the majority of the House. Consequently, it is said that this situation will continue for the next 2 years until the upcoming presidential election. The main issues among dialogue were,

１．Whether the result of the election will create and stabilize a political polarization.

３．How to view the current US economy and the problems they are facing to?

Through this program, it has become clear that issues will be intensified in the US, in the bilateral relation between the US and Japan, and in the global scope. This may lead Japan to tough situations. It was interesting  that President Trump’s diplomatic actions sometimes creates not so bad effect to the world. 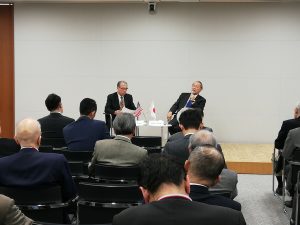