The 7th Next Generation Round Table (NGRT) was held on May 7th, 2019 at Roppongi Hills Club, beginning with a key note remark by Dr. Mieko Nakabayashi, Processor, School of Social Sciences, Waseda University. The professor gave brief but thorough explanations on the difference of the political systems between Japan and the United States, in particular the separation of powers, and the subsequent differences in political processes, political parties etc., not to mention the tendencies in common such as the increased independent voters.
Consequently, a question was addressed: “Which one do you prefer?” Through the group discussions, it seemed all the participants fully realized the infinite depth and breadth that the political science entails. Yet again we were impressed with the closing remarks by the professor that the substance lies not in the difference of systems but in the value that the politics seeks. 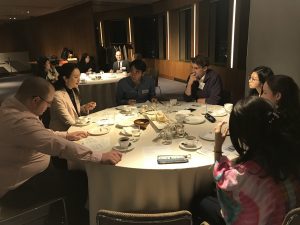